48 hr Discount Per Pound of Flesh 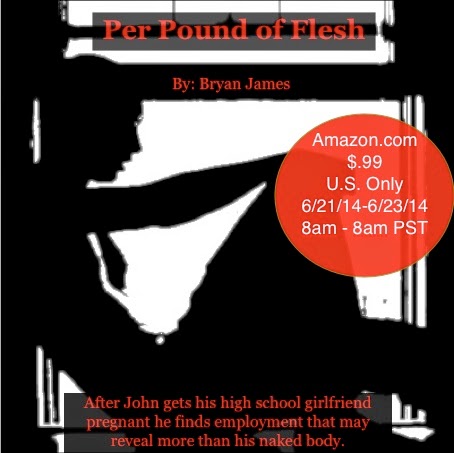 Amazon.com
Posted by Bryan James at 7:03 AM No comments:

Check out the latest chapter 35:

“I’m worried about traveling with him.  It’s one thing to be gay.  It’s another to be a gay couple, and it’s even more when you go out in public, especially places where you don’t know how people will react.  It’s one thing around here in D.C. but out there...”

Or go back to the beginning and get caught up.
Posted by Bryan James at 5:00 PM No comments: 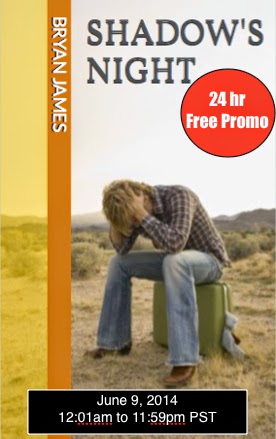 Buy The Book
Posted by Bryan James at 10:17 AM No comments:

The sound of knocking, then the sound of the doorbell awoke Simon from a nap on the sofa where he was flat on his back with one hand against his chest and the other hanging off the side.  He let out a moan and sat up.  There were no expected guests, no one would have been invited, and proselytizers had stopped coming years ago.

There was more knocking, the doorbell, he got to his feet and walked from the living room into the foyer, passed the game room and the parlor to the front door that he opened cautiously, leaving the chain still attached.  He was blinded by the sunlight and held up his hand to shield his eyes.

There was a glare as a form stepped into the light and he could make out it was a young man he didn’t recognize.  Was this someone from town?  Maybe a newspaper boy?  Hadn’t he heard all of the terrible stories about the place, about him?  He winced as he tried to get a better look but he realized he’d need to take off the chain.

He thought about the people in town, relatives, and then he remembered it.  Conrad, of course, but how the hell did he find me?  He unfastened the chain as Conrad stepped closer.  For a moment they were caught in an awkward standoff as each was unsure what the other would do but finally Simon opened the door and invited him inside.  Conrad stepped into the house and kept his eyes on Simon.  They looked at each other, assessing subtle differences, unsure how to greet the other.

It had been years since they had been together.  It was a different place and time for both of them when they were truly equals dressed in grey sweat pants and sweat shirts.  Each of them had gotten back to their own lives and how they changed showed that.  Conrad was dressed in a tank top, shorts, sandals, and sunglasses.  He had more muscles, notably his biceps, and he had tattoos, professional ones.  Simon was dressed formally in a button down shirt, vest, tie, slacks, and dress shoes.  He had a mustache.

Would a handshake suffice?  Maybe a hug?  Simon thought about the options and he didn’t like either of them.  He didn’t like this familiar person from his past being there, reminding him, and yet he had always been curious.

Simon smiled at the greeting and held out his hand.  Conrad took it and shook his hand before pulling him against his chest and wrapping his left arm around Simon’s side to hug him.  Simon was caught off guard by the action and had it been anyone else he would have resisted more, fought back, or complained but he didn’t.  He let it go, even after the hug was too long and became awkward and uncomfortable.  Finally, Conrad let him go and they stepped back from each other.

“You told me the town where you lived and it was pretty easy after that, after all I knew your name and lots of other things about you.”

Simon winced at the comment.  As nice as it was to see Conrad it was also reminder of his past, a connection to a time when he had been weaker, vulnerable.  What was it that made people friends?  What was it that bonded them?  And why did they think the relationship, whatever it was, could be mended so easily or had never been destroyed?  He pushed the thoughts aside and focused his mind on Conrad who sat before him with a familiar half smirk on his face.

“So this is your mom’s place?”

Simon winced at the comment.  Conrad had always been easy to mock religion and church, and though Simon didn’t believe in any gods he still felt guilty about mocking them.  It was Sunday school, he thought.

“There really aren’t too many Simon Winters in town.  I only had to ask at the gas station.  They knew the place.”

Conrad smiled and nodded.  Simon was near as he had remembered him with thick hair and dark eyes that always looked like they were inspecting everything and everyone.  There was a darkness there, he had come to know it, but there was also a sincerity and kindness of someone who wanted to live in a perfect world.  He was handsome in his own way but not confident.

“So what brings you here?  You just wanted to see me?”

“Well, I uh, kind of was passing through because I’ve been out of state.  I wanted to go see my mom.  She still lives in my hometown but I don’t really have the extra money for a hotel room.”

They stared each other in the eye but Conrad wasn’t going to give in, break or confess.  He felt like his lie was working.  This made sense.

“She’s pretty sick.  She has cancer.”

Simon broke from the eye contact and looked to the coffee table, to his hands that he rubbed nervously on his pants.  He had been caught trying to tell if someone was lying and he really couldn’t tell if he was.  He had his reasons to not trust Conrad but he also had his reasons to give him the benefit of the doubt.

“With me having been in juvenile hall, well it’s not good for me to be at the house too long or even stay around town there.  The cops there hate me.  I’d get a ticket just for crossing the street if they saw me.  And I’ve been working out of state so I don’t have a place around here.  I remembered you and I know it’s not like we’re high school friends but we were close.  You probably don’t want someone bringing up the past but I thought, I don’t know, you could help me out.”

Simon felt as if a ball of string in his chest had come undone.  He felt so bad for the person beside him, the person he had known, whose mother was dying of cancer.  He took a deep breath and let his shoulders relax.  It would be awkward but it could work.  He looked to Conrad, then past him and up to the ceiling where he imagined his mother in her bedroom.  This would need some careful explanation, he thought.

Buy The Book
Posted by Bryan James at 9:09 AM No comments: