Reflections on Per Pound of Flesh 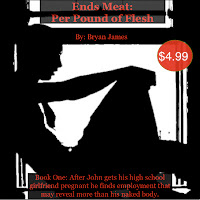 I had first imagined the story some years ago when I was in a large grocery store and I would always see the men who worked in the butcher department.  I began to think about what their lives must be like and how they made living.  I can’t say that I portrayed their life but it was a question that got me started thinking about the story.

The idea started first as a vignette about a young man from the butcher department needing a roommate then being introduced to a coworker who was openly gay and a student at a local community college.

I also wanted to explore the idea of a young couple with a child, something I saw at college.  I imagined a young man with bills to pay, maybe a high school diploma, and a wife.  This isn’t to say that he was worse off for any of these things but as I thought about the job, day after day, year after year it made me think about the daily grind.

Over the years as I thought about this young man struggling to pay bills, raise a child, and achieve satisfaction the character grew as my own life developed.

The story went through many iterations with initially the character falling for a male coworker and the two of them getting an apartment together, possibly a gay romance where they recognize happiness and end up happily ever after but the story wasn’t as interesting to me and the writing stalled.

With all of these elements I created John, his wife Brandi, Dennis, and other characters to explore the idea of sexuality, sex, and relationships.  To me John is a bisexual, naive but curious and like many people unconsciously forces himself into dilemmas in order to understand or confront some aspect of himself.

Like many people he has his own internalized feelings and fears the social consequences for what he does because of where he lives and the people he has known in his life.

In part it is the act of sex, the homosexual act of sex, sodomy, and being labeled as gay but it is also being paid for sex, the act of a prostitute and whore to those he knows.

Despite these factors he acts and engages in a pornographic film.  He is labeled by the industry as what is known as ‘gay for pay’ being perceived as a heterosexual man performing in gay sex for money.  This raises his value so he goes along with it.

Adult film, sex work, prostitution, pole dancing, stripping, or any sexual act is simultaneously exonerated and deplored.  We want to look.  We want to know but yet it is still taboo despite the increasing depictions in popular media.  And those who do it, those we watch are often labeled as whores and exiled from society.

Though I am curious about these matters I also want my book to be entertaining and to relax people, to be a distraction after a hard week of work.  I want it to be a simulation but not practice or a guide.

If you are interested check out the preview through Amazon.com on your Kindle or other electronic device.