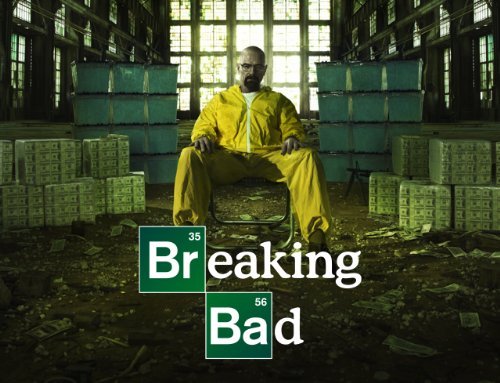 I, like many others, am anticipating the return of Breaking Bad, starring Bryan Cranston, and created by Vince Gilligan.

Breaking Bad is a well plotted, well characterized show that manages to depict each character’s motivation for their actions, from drug production and selling to even murder.

The show itself is about how good people do bad things, mostly because of pride but also because of the existential crises they face.

I recently found myself thinking that I had heard or scene the news report about how Walter had been caught before, that I had seen that episode of Cops or read about a criminal or mobster in a history book or news article and it struck me that ‘Breaking Bad’, or at least Walter White’s story, could be finalized in a news report.

After all when I was younger I had seen those news reports of criminals, those people who committed crimes, and barely understood their motivation, much less how they went from ordinary law abiding citizen to criminal.  Criminals were criminals.  Ordinary citizens were ordinary citizens.  Cops and robbers.

More often I had seen mobster characters as just mobsters, maybe tragic hero in the case of Tony Soprano, but for the life of the show I had only known him as a mobster.  I had never confused him for an ordinary citizen.

Someone else who broke the law was a junkie, or a drug user, such as in Trainspotting, but that was different itself as it was ‘self-medication’, the use of a substance for somewhat passive reasons.  These people committed other crimes but they seemed petty somehow.

Bones, Vegas, Justified, and many other shows all have the characters who break the law when they need to break it, operate outside the law, or are outright sociopathic criminals but this is different.

Breaking Bad to me is something else.  I can identify when Walter’s actions changed, especially when he killed Krazy-8, whom he was about to let go but ultimately decided to kill because he recognized the man as his enemy willing to kill him.  Although I think his nature is still very much the same, a nature that drove him to such extremes throughout the show in reaction to an extreme situation, I had much sympathy for his character.

Perhaps if he hadn’t contracted cancer the actions would not have been as severe but I could still see his character, his nature, reacting in some way to his growing family dilemma.

Regardless, as I thought about the series I also thought about if Walter White, his wife Skyler, and Jesse Pinkman had been caught.  I thought about what that news story would look like as I sat in a bar sipping a cold beer while watching the small television just above the shelves of liquor and this is what I imagined.

Hello this is Mindy Aprile

Today it was discovered that a former Albuquerque, New Mexico Area chemistry high school teacher Walter White and his wife Skyler White were part of a large scale drug production and money laundering scheme whose tolls add up into the millions in what an unnamed DEA source says is one of the largest busts of an organized production maybe ever in the United States, the kick here is that the brother of the wife to the drug kingpin is a DEA agent himself.

It all started about a year ago when Walter White was diagnosed with Stage IIIA lung cancer, a normally terminal disease for those diagnosed with it.

Facing this terminal disease with a pregnant wife and disabled son Walter like many Americans sought treatment, but like many Americans found that treatment was an expensive proposition.  It was then that Walter turned to methamphetamine production with the help of a former student named Jesse Pinkman.

Like many in the illegal production and distribution of drugs they found the need was great.  With a few store bought drugs, some chemistry equipment and lab chemicals, plus know how these two were able to make a common ingredient into one of the most addictive substances.  From what started out as a small operation quickly grew.

The two men were then on a boat in rising water, dealing with competition and other problems of the street drug trade they found themselves in a constant fight for their life.  They then turned to a man by the name of Gustavo 'Gus' Fring.

Able to pay for his treatment the cancer shrunk until it was optimal size for a very costly surgery which Walter paid for with his money from drug production but he was soon faced with another problem of this illegal business, too much cash.

Like the drug cartels of Mexico Walter had to find a way to launder this money while retaining as much profit as possible.  It is here where it is believed he used his wife and her knowledge of accounting business practices to purchase and fund a legal front, ironically a car wash where Walter used to work part-time.

Perhaps it was the dream of someday being his own boss that was finally realized but it wasn’t enough to get out of the illegal drug business.  Like many men before him when the previous drug kingpin, Gustavo Fring was killed in a sudden and violent explosion that is believed to be cartel related, Walter decided to take over the open market.

And like many criminals he found that his luck was running out as well with the police, in this case his own brother-in-law Hank Schrader.  It is not known yet what exactly happened but suffice it to say Walter White, his wife Skyler White, and Jesse Pinkman are now wanted by the law.  They took a great risk for great reward.

For a man who had once faced a terminal disease and shortened life he now faces criminal charges that could be a life sentence in prison or possible retribution from Mexican cartels.  Whatever his fate this man made the choice to go against the rest of society.

It is believed that Walter White, his wife, and son are all traveling together.  Jesse Pinkman’s whereabouts are also unknown.

All suspects should be reported to the police immediately, do not approach them as they could be armed and dangerous.
Posted by Bryan James at 4:09 PM