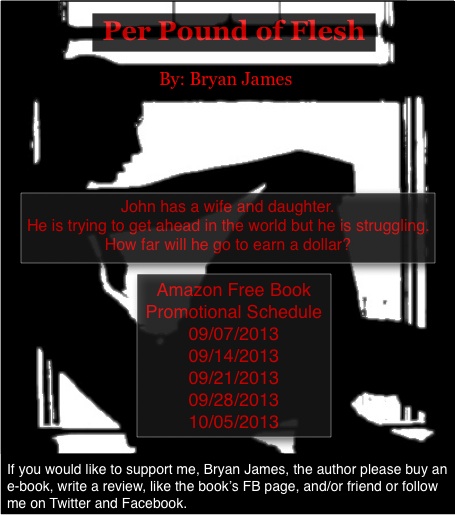 I decided to do something radical and schedule all of my Amazon free book promotional days then post a schedule of when they will be... 5/5 for the next 90 days. If you get the book/have it and like it or don't like it and want to tell me about it please leave a review or send me a message. 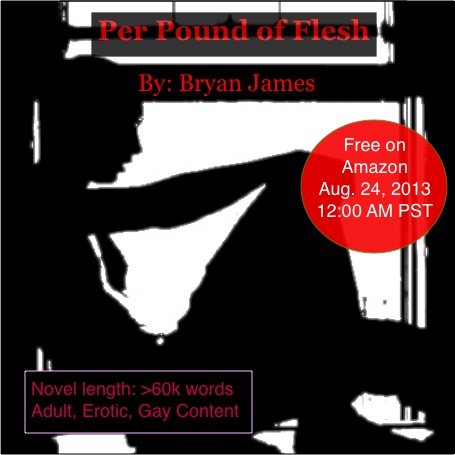 Posted by Bryan James at 4:59 PM No comments:

Inside the Beltway (Serialized Fiction)

As of July 29, 2013 or yesterday, I, Bryan James, have become a regular contributor of a serialized fiction story to the Swish Edition, a podcast and LGBTQ interest site for news, gossip, and entertainment.

My series is called ‘Inside the Beltway’ and to me is my response, my answer, to the absence I feel without Queer as Folk (QaF) and the L Word.  I had different formations of this story in my head for many years, wanting something fun but also responsible.  I wanted a modern story like QaF and the L Word were for their time.

There were little grasps at a gay story but nothing quite stepped up.  I loved the Outs but it was short lived and now the new story by Adam Goldman is something entirely different but I bet it will be genius.  There is the homoerotic Teen Wolf and True Blood but it isn’t enough.  Although personally for me I love the Teen Wolf fandom and I’m a Sterek shipper but I know it’s never going to happen.

Inside the Beltway is a serial story that is posted weekly.  It is my attempt at modern characters dealing with the current society.  My focus will be on four main characters, gay men: Bobby, Spencer, Darrell, and Triston.  These characters arose from my own personal experience.

Four friends Darrell, Spencer, Bobby, and Triston are living in the D.C. are trying to make a living, make careers,and find boyfriends, hookups, and maybe a few casual sex encounters.

Darrell and Spencer know each other from college.  Darrell dropped out to join the Army where he became a linguist.  He was kicked out after it was discovered he was openly gay.  He struggles with his identity as a gay, black man.

Spencer graduated from college and held several internships until he landed a job with a government consultant group.  He ascended quickly from mailroom to consultant but has reached a plateau in his career and needs a horizontal change.

Bobby, a second generation South Korean in the United States, comes from the Los Angeles/Hollywood area where he attended college while living with his parents.  It was during that time that he came to terms with his sexual identity and began to obsess about fitness and his body.  He traveled to D.C. for an adventure away from his family.  He works part-time as a personal trainer under the table and at department stores.

Triston is an underachiever who majored in Philosophy at college and barely passed his courses.  He is both skeptical and open minded.  He works at an adult store selling sex toys, movies, and other forms of entertainment.  He co-hosts a local munch for kinky people.

For the past year I have been, ahem, researching gay life on the internet which is a new aspect of our lives not explored very much in QaF.  What does it mean to be outed on FB or have a sex tape?  What does it mean to have someone contact you after twenty years of not talking?  And how do we cope with losing our anonymity in an increasingly public society?

My exploration of these characters in a city I found to be complex in my brief time there is possible because of the support of The Swish Edition.

Working with the Swish Edition  is very exciting for me.  I found their podcast by accident one night as I was searching for something new to listen to and before then I didn’t really listen to podcasts.  I started listening about a year and half ago and right away I thought the guys were hilarious, sometimes rude and crude but hilarious.  It was because of them that I got interested in the D.C. area and adventured down there on a job prospect.  I landed the job, though it didn’t last long, but it did give me time.

I used the money from the job to spend time writing Per Pound of Flesh, which I partially dedicated to the show, because they gave me some much needed gay hilarity.  It was because of them that I sought out more podcasts.  They told me about The Outs, Elephant, Nasty Pig, and lots of other gay interest subjects it would have taken me longer to find on my own or may have never found at all.

Our relationship started on a lark when I found a picture in the depths of Tumblr of a sex slave man who looked similar to one of the hosts.  I decided I had to send them the picture so that was when I created my email account and actually began my nom de plume identity.

Until then it had been a struggle for me because I felt very bound to my accounts, to being the person others wanted me to be.  Bryan James for me is like Don Draper for Dick Whitman.  It is the man I want to be.  The man I am inside without history and context of people who say they knew me when.

I sent the picture, we had a good laugh, and then I connected with them on Twitter when they were having contests for new followers.  I did happen to win a small prize package, this was while I was in the D.C. area.  I had to explain to my roommate why a package might show up with a name that wasn’t mine.  She was amused.

About a year later I decided after much toil to self-publish my first book Per Pound of Flesh and then a second book Controller Cords.  Those two books for me were liberating.  I felt as if I had ripped something from myself and it became a new entity.  I had always feared doing this would be too self-harming but I found out actually that wounds heal.

I had been working on blog stories previously, two YA stories in fact, but I lost interest in them because somehow I think I got stuck thinking about what YA should be instead of being innovative.

Writing these two books, but more so self-publishing them, has been a great learning experience and forced me be more bold in social media.  I have taken to Goodreads, Facebook, Twitter, and Tumblr to promote myself with minor success.

I do have another, new story in me that I am writing as well as this weekly serial.  For me it will be the first main character that I have written in a while that focuses on a straight man.  Until I wrote and published Per Pound of Flesh I felt as if I had to represent something.  I had a compulsion to write gay characters.  I still do.  But this is a different story.  There is a gay supporting character who might also be considered a main character but this just feels different.

You can find excerpts of my books published and unpublished on my blog Briefly Told Stories.  I also write essays and reviews on my blog Queer Words Make Stories.

As per originally posted on Mychael Black Books: http://www.mychaelblackbooks.com/guest-bryan-james-2/
Posted by Bryan James at 7:55 PM No comments: